Tom Leonard’s Farmer’s Market is a family-owned business that believes in supporting local Virginia farms whenever possible. Because we source only the best meats, seafood, fruits and vegetables directly from our network of family farmers, ranchers, growers, and docks you’ll find the freshest produce in town at a terrific price!

Tom Leonard’s history can be traced back to the early 1920s, when Charles Leo Leonard started Clover Farms Dairy in Norwalk, Connecticut. It was a state-of-the-art dairy by the standards of the time – with a pasteurizing and bottling plant, and later on, fresh milk delivered daily by trucks that had plastic cows on the front that “mooed” for the neighborhood children.

In the late sixties, Stew Leonard, Charles’s son, built a retail dairy store where children could watch milk being bottled while mothers did their shopping in a farmer’s market atmosphere. In December 1969, Stew Leonard’s opened its doors – a 17,000 square foot store carrying just eight items, and has remained a family business to this day. 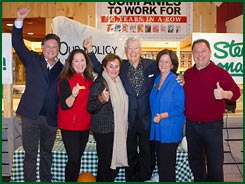 Stew’s son, Tom Leonard, opened the second Stew Leonard’s in Danbury Connecticut in 1991, and then decided to plant his roots in Richmond and opened his own store in Short Pump on March 9, 2004.  His son Tom Jr. (TJ Leonard) joined the family business in 2014 and is helping to get Tom Leonard’s Farmer’s Market ready for the next generation of Leonards!

Each of these awards are a result of an ongoing focus on quality, value, and a belief that the customer is always right.

HEAR FROM OUR CUSTOMERS

Rated 5 out of 5
"Great place to shop at for a variety of things. I love the atmosphere of this store and they have good, healthy products as well. The checkout line is also very speedy which is great, because usually that is quite an issue with some farmers market stores like this. We do not come here often but we love it each time. Definitely recommend to anyone who has never been before!"

Richmond, VA
Rated 5 out of 5
"It was my first time at Tom Leonard's Farmer's Market. Was brought in because of the radio commercial about their Lobster tail sale. Was very impressed with all of the other prices on various items there.  I did not go here because it was close to my home (45 minutes away) but because of pricing. I will be going back because of the quality and customer service."

Chesterfield, VA
Rated 5 out of 5
"A great place to shop and buy fresh products. The staff are very helpful and friendly. Their selection of take-home meals are unbeatable. You can NOT go wrong buying groceries here."

Midlothian, VA
Rated 5 out of 5
"We were visiting from out of town but this place had orange and yellow watermelons which are very rare! I also saw and purchased some of the most beautiful red peppers I have ever seen! They have an excellent selection of produce. The meats looked reasonably priced. They also carry spices and baked goods. Very friendly staff as well!"

Concord, NC
Rated 5 out of 5
"Tom Leonard’s is always the go-to place! I have been shopping here since the grand opening! Always fresh food, great selections, great seafood! Perfect all year around! Prices are amazing also!"

Glen Allen, VA
Rated 5 out of 5
"Thanks so much for being one of the places my children most love to go in town! My 4 year old has been playing "Tom Leonard's Farmer's Market" all afternoon with his toys in between bites of blueberries and concord grapes and even my cranky, teething 16 month old was soothed to smiling with a sticker, some cucumbers and heirloom tomatoes. We love the cheerful staff and local produce!"